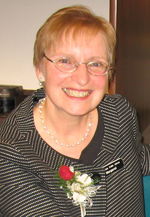 The La Crosse Franciscan Sisters of Perpetual Adoration have historic roots in mid-nineteenth century Barvaria, Germany.  In 1849 a group of twelve Franciscan men and women from Ettenbueren, Bavara, came to Milwaukee with the intention of forming a religious community dedicated to serving the growing German-speaking population.  In 1871, after a series of moves and reconfigurations, the Franciscan Community of nearly 100 women settled in La Crosse at the invitation of Bishop Michael Heiss.  St. Rose of Viterbo Convent was built and became the home of the Franciscan Sisters of Perpetual Adoration.

During 140 years of service in the La Crosse region, the FSPA have made a significant and continuing contribution to the religious, social and educational  environment in the area. Today, the eight block Franciscan campus includes the St. Rose Convent, Mayo/Franciscan Healthcare System and Viterbo University. The campus manifests the historical and continuing service mission of the FSPA and displays a well preserved architectural legacy of late nineteenth and early twentieth century buildings in La Crosse.  Many of these buildings are architecturally and historically significant, and seven of them have been identified as eligible for the National Register of Historic Places.

In many ways, the continuity of the service mission of the FSPA community in La Crosse can be traced in the history and architecture of the buildings. The connection to the German speaking cultural tradition is evident in the selection of architects, builders and artisans.  Joseph Leinfelder, a fellow German immigrant and brother of one of the early leaders of the order, built the first FSPA motherhouse in Jefferson, Wisconsin, in the 1860s, and later designed many of the buildings for the new diocese in La Crosse, including the original St. Rose Convent (1870-1874) and the Bishop's House (1877). Eugene Liebert, the architect for the Maria Angelorum Chapel (1906), was also a German immigrant.  A highly respected Milwaukee architect responsible for many of that city's landmark buildings, Liebert was trained in the old world building tradition after he immigrated to Wisconsin.  Many of the artisans and artists involved in the interior design of the Maria Angelorum Chapel had European roots.

Bernard Dockendorff was born in La Crosse, but apprenticed with European born local architects Hugo Schick and Otto Stolze and received formal training in Darmstadt, Germany, before partnering with Albert Parkinson to form the noted local architectural firm of Parkinson and Dockendorff.  This partnership lasted from 1906 until the early 1950s and is credited with designing many of the finest public and commercial buildings in La Crosse in the early twentieth century.  Parkinson and Dockendorff designed St. Wenceslaus Church (1915), St. Anne's Maternity Hospital (1927), St. Francis Hospital (1931), and St. Francis School of Nursing (1942). Viterbo used Milwaukee architects E. Brielmeier & Sons and Brielmaier, Sherer and Sherer for what is now called the Murphy Center and the Viterbo Fine Arts Center.

The historic buildings on the Franciscan campus starting with the rebuilt St. Rose Convent (1924) all feature a distinctive fine-textured dark to reddish-brown brick with contrasting white cut stone highlights.  The neo-classical ornamentation often features glazed or smooth cut medallions, another consistent detail of these historic buildings.  Note this similar appearance as you explore this historic campus.  Over the decades the use of many of these buildings has been modified and in some cases completely changed, yet the historic character and consistent exterior appearance has been maintained.  The sacred traditions and three-fold mission of the Franciscan Sisters in La Crosse continue with the modern use of these historic buildings.

Taking the tour is easy! Use the map to the right to select a point of interest. When you hold your mouse over one of the building icons on the map more information will appear in a bubble. To view the detailed information on that location, just click on the "Details" link. From there you can use the "Next" or "Previous" buttons to visit more locations or you may select a new location from the map. You may also use the button below to start a already selected tour.

This project was made possible by support from: