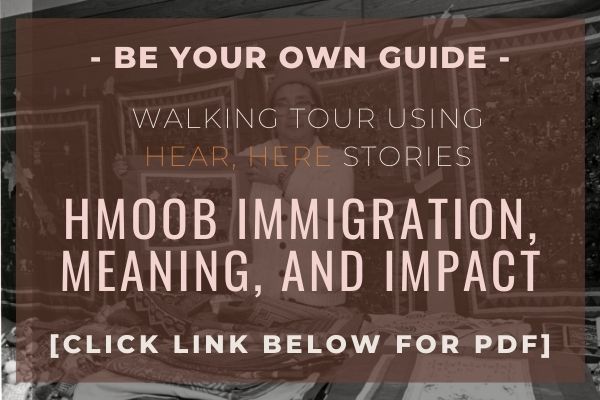 This tour is part of the Voices of La Crosse History Tours, a collaborative project between the La Crosse Library Archives & Local History Department (LPLA), UW-La Crosse (UWL), and Hear, Here. If you are unfamiliar with these groups, Hear, Here is a project that collects first-person narratives—or stories—that take place in the downtown area. Each of these stories is made accessible through street signs that list a phone number to call. When you call the number, you can listen to a story that took place in the location where you are standing. The LPLA collects, preserves, and makes accessible local history for the community. Most of the research for these tours was done at the LPLA.

This tour focuses on the Hmoob (pronounced “Hmong”) experience. Each story featured on this tour represents different experiences, different lives, different themes, and different perspectives of the Hmoob immigrant experience in La Crosse. The first will be a poem about the Mississippi and Mekong Rivers, the second is about an anti-war protest, the third story expresses the emotions that pictures from the past can evoke, and the final storyteller remembers his first home in La Crosse. The stories all touch on themes of family, home, life-changes, and community.

Please note that much of the written history about Hmoob immigration to the US has been researched, written, and published by white scholars. If you wish to learn more about Hmoob history, try to locate resources created by Hmoob and Hmoob-American scholars to educate yourself from a non-US-centric perspective to eliminate biases and misinformation.