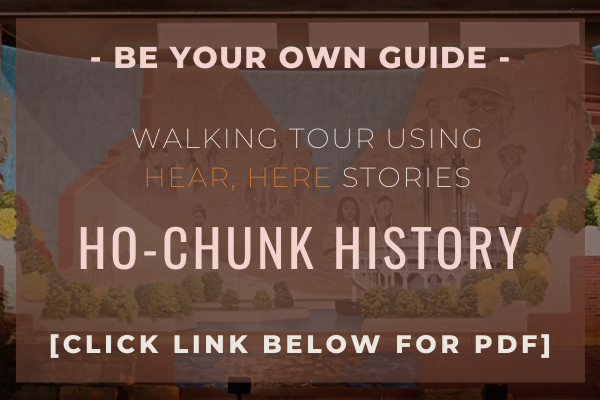 This tour is part of the Voices of La Crosse History Tours, a collaborative project between the La Crosse Library Archives & Local History Department (LPLA), UW-La Crosse (UWL), and Hear, Here. If you are unfamiliar with these groups, Hear, Here is a project that collects first-person narratives—or stories—that take place in the downtown area. Each of these stories is then made accessible through street signs that list a phone number to call. When you call the number, you can listen to a story that took place in the location where you are standing. The LPLA collects, preserves, and makes accessible local history for the community. Most of the research for these tours was done at the LPLA.

It is important to know that much of the written history about the Ho-Chunk has been authored and published by white scholars. Please note that this tour is a working document. We welcome critical feedback to improve the content, information, and language in this tour, especially from Indigenous people.